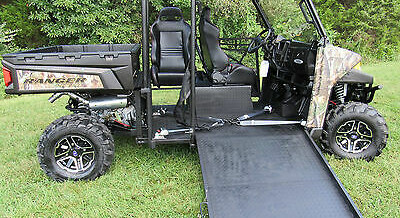 Yes and no, says Eric Garrett, who uses a wheelchair because of an accident. Eric says if a rider has good upper body strength and the ability to move and shift his or her weight, then “an ATV can be pretty safe. But you’ve got to be an active rider, or your momentum will carry your weight over.”

Modifying an ATV to include a high-backed seat, seat belt or any kind of restraining device is very dangerous, says Garrett, because the rider could be pinned under the machine if it flips.

Get training, wear safety equipment and start off slowly, he advises. Be sure the rider’s arms, legs and hands are big enough for the machine. And even though the seat seems big enough, don’t carry two passengers on an ATV. Instead, Garrett recommends a “two-up” ATV that has a passenger seat with footholds and handholds.

If an ATV isn’t right for you, check out go-carts and golf carts. They do well on moderately uneven terrain and often are cheaper than ATVs.

“I recommend them for anybody, especially those with limited mobility,” says Garrett. Go-carts feature roll bars and high-backed seats with five-point safety harnesses. Kleen recommends go-carts with reverse, an electric start motor and big “flotation” tires. He notes that many go-carts can be easily modified with automobile hand controls meant for people with disabilities, so the brakes and gas can be operated by hand.

In the more expensive range, mobility utility ATV’s such as the Kawasaki Mule and Mobility Quad are ATV’s designed for more rugged off-road use. Also at the top of the price list, rural pursuit vehicles allow a wheelchair to be rolled into an all-terrain cart, which then is operated from the wheelchair. These vehicles can go just about anywhere. Done safely, off-road riding is a fun sport for the whole family, says Garrett. “I’ve been in a wheelchair 20 years and I can go out and participate with my nieces and nephews. There’s not many sports where you can do that, where everybody can enjoy it.”

Be very careful with ATVs, warns Greg Carter, co-director of two MDA clinics in Washington state. Carter is a specialist in physical medicine and rehabilitation and works at a level 1 trauma center.

Carter cites a sobering study sponsored by both the ATV industry and federal government that found an increase in emergency room visits for ATV-caused injuries in recent years. The injury numbers reflect the increase in the number of ATVs in use, more riders, longer hours of ATV riding and larger machines.

Carter stressed the need for formal training in ATV operation. “If someone with a neuromuscular disorder takes up ATV riding, this is even more critical,” he says.

Make sure the person with neuromuscular disease has proper back and neck support to prevent serious spinal injuries, urges Carter.

“A person with muscular dystrophy could be injured just by a sudden stop. Even a minor crash could prove fatal if the person’s neck were broken,” he warns.

“Unfortunately, the neck musculature is often very weak in folks with any form of muscular dystrophy. Thus, the combination of weak neck muscles, plus the added weight of a helmet along with a sudden stop or sharp turn could produce enough force on the neck to produce a major injury.”

Carter, 17, of Park Rapids, Minn., received the Rhino in 2015 through the Make-a-Wish Foundation. He and his 10-year-old brother Shawn both have Duchenne muscular dystrophy (DMD).

Carter’s mother Connie says her son has wanted his own ATV ever since riding on a friend’s several years ago. However, that ride involved using bungee cords to keep Kyle upright and on the seat. His own ATV is much better equipped for safety.

The Rhino has been modified to include a roll bar and five-point safety harness, and Kyle always wears a lightweight helmet. Recently, the family has experimented with using foam inserts to stabilize his head so it can’t tip to one side while he’s bouncing along. The vehicle also has been outfitted with a homemade windshield and cab, to make it more comfortable for winter riding.

Because of his diminished arm strength, Carter can’t drive the Rhino, but he still manages to ride almost every weekend and some evenings, going out with friends and family members. His trips often take six to eight hours.

“In our family, we do whatever it takes for our boys to do what normal kids do,” says Connie Carter. “Both of my boys enjoy hunting, target practice, video games, fishing and anything outside. The word ‘can’t’ isn’t in our vocabulary. Everyone in the family pitches in to help.”

Hmmmm, what to do with a one-ton garbage truck nobody wants anymore? One solution: Turn it into a wheelchair-accessible all-terrain vehicle that enables a nature-loving family to be together again in the wilds of Alaska.

Tony’s Buggy is the name given the contraption, named for Tony Delarosa, 15, of Palmer, Alaska, who has DMD.

“We’re really an outdoors family, and Tony loves to be outside,” says his mother, Misty Delarosa. “Now we can go other places besides our front yard. We can go blueberry picking, go down to the Matanuska River and have picnics, get stuck, get sunburned.… Luke just wants to participate and be there.”

Tony’s stepfather, Glen Delarosa, saw the potential in the former garbage truck, which the family got free from a friend. Experienced in welding and metal fabrication, he replaced the truck’s steel cage with a flat deck.

“People heard what we were doing and all of a sudden, we had a wheelchair lift for the back,” says Mrs. Delarosa. The four-wheel-drive vehicle also sports a winch on the front, as well as a tow bar to haul it to the trails (it’s not street legal). There are tie-downs for Tony’s wheelchair, as well as for a bench seat from their van, which accommodates Mrs. Delarosa and daughter Julie, 7. There’s even a handicapped sign on the back.

“The buggy is pretty cool, and we do all kinds of fun things with it,” says Mrs. Delarosa. “We’ve taken it on mountains, trails, across streams, to the Matanuska Glacier. The first time we got on it I cried, because we all could go out together again.”

This is not the family’s first improvisation. When Tony was still able to walk, his stepfather built a sled complete with a roll bar and headlights to pull behind their snow mobile. Nowadays, Luke’s winter vehicle is a Santa Sleigh covered with Christmas lights, that has been rigged up with a portable ramp and can be pulled behind a tractor.

Six-wheeler is a grown-up blast

“I have spinal muscular atrophy. I grew up in rural New Jersey. As a child I drove anything with a motor: go-carts, snowmobiles, lawn mowers, farm tractors, three-wheelers, and especially six-wheeled ATVs,” says Daniel Drupalo,

“Many friends had motorcycles. I had my six-wheeler. It gave me the freedom to get far far away from home. To this day my parents have no idea how far away we would go. The times it would break down and we would have to fix it are cherished memories. New Jersey winters were brutal and we rode rain or shine, in fact mud was always preferred.

“I hadn’t ridden in a six-wheeler since I sold mine in 2010, but two years ago I was inspired to get another one. I only ride it at the Burning Man Festival but for eight days it’s a blast.”

Although ATV’s are banned for use at local theme parks in attraction such as Disney World, Universal Orlando and SeaWorld, you can always use a mobility scooter rental in Orlando.