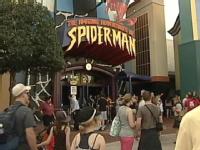 Universal Orlando reopened “The Amazing Adventures of Spiderman” ride on Thursday after a month-long renovation.

The ride offers new energy and new thrills, according to the design team.

Visitors to the new ride were excited about the updates.

“Awesome. I thought it was really cool because of the 3D,” said one visitor. “It’s much better.”

Officials said the story is the same as it was when it opened in 1999. The riders are part of Spiderman’s battle against evil villains.

“We had a chance to make it even better,” said Eric Parr of Universal’s creative team. “That’s what we decided to do. We think we’ve done a really great job making it more dynamic, more colorful, more intense.”

Earlier this year it was announced that the ride was going to be included in a multimillion-dollar upgrade at the Universal Orlando Resort.

“You’re up, you’re down. You feel like you’re flying and falling and upside down,” said park visitor John Brose. “Yeah, it was a lot of fun.”