It’s a “Small World” after all; new iPhone & iPad app

Perhaps no other Walt Disney theme-park attraction gets as much ridicule from adults as does the iconic “It’s a  Small World” ride.

Yet, for all the jokes about the attraction, and especially its mind-numbing musical accompaniment, most adults still seem to take a great deal of pleasure in climbing into the ride’s boats and embarking along a colorful water journey through some of the world’s best animatronic cultures.

Parents get a kick out of watching their young kids’ enjoyment of the attraction, of course. ...

Scootarama admits it is taking scooter vacationing –the newest travel trend to hit Orlando, Florida–into a completely new degree of professionalism, fun and convenience by giving full-service scooter rental providers to all vacationers, whether they call for a private transporter for walking aid or merely a sporty solution to create their Orlando experiences more relaxing and enjoyable. Since Orlando premiere scooter Business, Scootarama creates the rental selection for all travelers easy by providing the most Disney World ecv ...

Work continues on Hollywood Drive-In Golf, the miniature-golf courses set to open this month at the entrance of Universal CityWalk.  The overall theme will be cinematic, with one course being sci-fi in nature (“Invaders from Planet Putt”) and the other based on do not
forget your orlando scooter rental. Scootarama may not resonate with the average tourist visiting Orlando, Florida. But if you are physically disabled, and in need of a motorized scooter for use in the local theme parks such as Disney World, Universal Studios and SeaWorld; then Scootarama will be a household name for you. Coming highly recommended by websites like Passporter.com and Allearsnet.com it really cuts out the huge guessing game when choosing a scooter company. Undisputed leader in customer service this Disney World scooter rental ...

Which Super Bowl MVP is going to Disney World on Monday

Someone will be going to Disney World after the Super Bowl on Sunday, and he’ll be making good on that promise quickly. A member of the championship team will be honored with a parade at the Magic Kingdom on Monday.

Of course, we can’t know the player’s identity until after the game pitting the New England Patriots and New York Giants in Indianapolis.

The parade will travel down the theme park’s Main Street just before 1:30 p.m. on Monday. It will be included in regular park admission.

Turkey talk at the theme parks

From a safe distance at Disney’s Animal Kingdom, I watched a momma and her three cubs snack on something fowl. They tore into the meat, chewing down to the bone, maneuvering around cartilage to get at every morsel.

Nearby, the poppa removed the skin from his portion of the feast and popped it into a trash can.

This fair-haired British family of five was consuming, for the first time, the ubiquitous

Do you want good food; head to the theme parks

Some people love theme parks for the rides. Some for the shows. And while you can lay down some serious cash for not-so-haute cuisine like churros and turkey legs, there are some who love the parks for the food, and some of the best in Central Florida can be found around the attractions. Using a scooter by Scootarama can help you navigate the theme parks you’re not physically capable of doing so alone.

The Orlando Sentinel recently came out with their ... 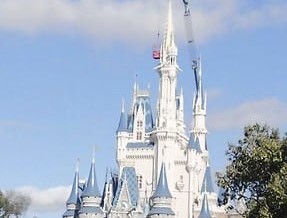 The Frontierland work means the parade can’t get through — so a modified version ...

SeaWorld Orlando again is offering a free “Teacher Study Pass” that gives active and certified Florida school teachers entry to the theme park through the rest of the year.

To receive the pass, teachers must pre-register at www.SeaWorldOrlandoTeachers.com. When they go to SeaWorld, they then must bring Florida teaching certificate, recent pay stub and photo ID. The pass has no black-out dates.

SeaWorld presents its “Study Pass” as part thank-you card, part educational inspiration. It says the park provides experiences that can ...

Universal Orlando will unveil a bundle of attractions — including its first daily parade, an after-dark salute to movies, a new Blue Man Group show, its “Despicable Me” production� and high-tech enhancements to its Spider-Man ride — during the next few months.

Although these multimillion-dollar additions are sprinkled across Universal property, the bulk will be inside the Universal Studios theme park, which has stood in the shadow of its sister park, Islands of Adventure, since The Wizarding World of Harry Potter opened there in 2010.

This spring, the Studios will ...